The writing contest is now closed and I have stopped editing. Actually, apparently you CAN still edit your manuscript -- but the contest administrators swear you can't. While they're working that out, I've decided to LEAVE THE NOVEL ALONE and move on to other things...

...such as what we did last weekend. Rocket Boy has been wanting to explore an area between Ridgecrest and Trona called Poison Canyon. So on Saturday we set out to do just that. We weren't sure exactly where it was, so we both looked online, and came up with entirely different directions. Because I am the girl, we followed my directions first.

My directions led us to a place where you can go off the highway (Highway 178 between R'crest and Trona), down across a deep wash, and along a rocky road to the fish rocks.

These are the fish rocks: 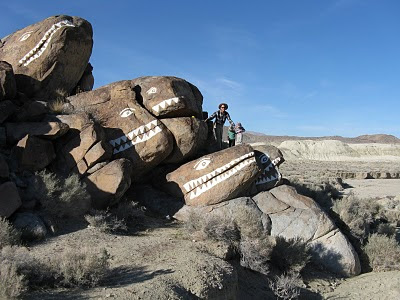 Rocket Boy and the twins climbed up on them, while I stayed on the ground and took photos. As I walked around, I noticed pieces of glass all over the ground. I was afraid to put my hand down anywhere, for fear of being cut. When we started walking beyond the fish rocks, there continued to be glass absolutely everywhere, all different colors, embedded in the sandy soil. I commented on this to RB: "It's like people come out here just to break bottles!"

I tend to forget how much people out here love their guns.

Poison Canyon, once you get beyond the fish rocks, is a very creepy, funky, interesting place. 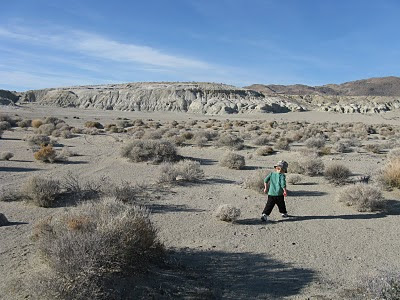 More and more I'm realizing how much I love the desert. Don't get me wrong, I like green places too. I like grass and trees and water. But the stark beauty of the desert is pretty mind-blowing.

The boos enjoyed Poison Canyon too. They walked happily through it, and whenever Rocket Boy climbed a rock, they climbed it too. This quickly became very dangerous, because they had no idea what was safe and what wasn't, and they were too quick for me. I had to keep yelling to Rocket Boy that either Baby A or Baby B was in a dangerous spot and could he please go and rescue him. 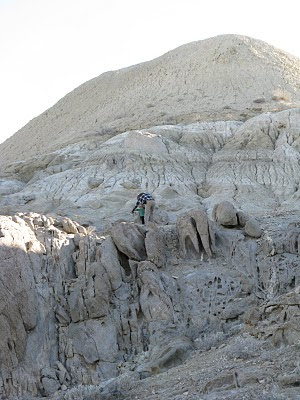 As we walked back to our car, Rocket Boy climbed a rock and found an old mineshaft (which all these hills around here are full of). He showed it to Baby A, upon whom it made a big impression. For a few days after our trip, both boos talked about "Poson Cannon." I would say "do you want to go back to Poison Canyon?" and they would say "yes!" but Baby A would add, "No like big tunnel!" (meaning the mineshaft)

After quite some time in this area, we got back on Highway 178 and followed Rocket Boy's directions, which took us to another area entirely. Here there was water (Poison Creek, we think). 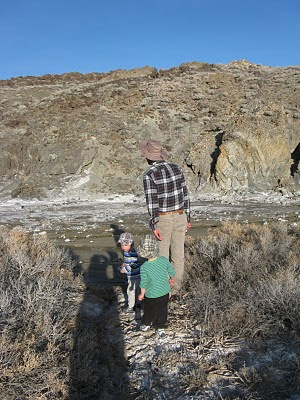 Poison Creek is called Poison Creek because it contains toxic levels of several different minerals. "Don't drink that!" I said to the twins. "It will make you sick!" Rocket Boy being Rocket Boy, he took a drink from the creek. "Whew, salty!" he said, spitting it out.

So here we have both the pluses and minuses of having Rocket Boy for a father. If the twins survive their childhood, they're going to be very savvy outdoorsmen. If.
Posted by Flicker at 4:32 PM